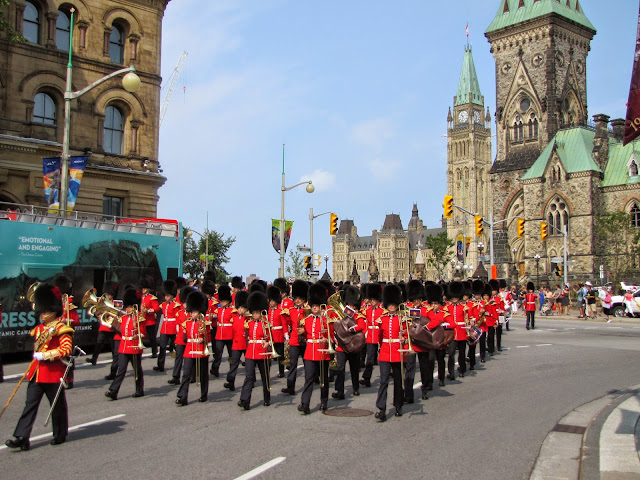 SEPT. 29/2017 - Today's blog post comes to you from Canada's Capital where tonight the Saskatchewan Roughriders visit the Ottawa RedBlacks.

1) This is one of Canada's most beautiful - and certainly historic - cities. A walk around here is always full of interesting things everywhere you look.

2) The Roughriders are favoured to win.

3) My wife is with me for four days out here.

4) One of my Recovery clients got his job back and is on top of the world! That might have me feeling better than anything else.

I reached out to the employer of another potential candidate this week but the response was, "It's okay! He's cured!" (Or something to that effect).

My mind flashed back to three months into Recovery myself when my own boss said, "You don't need to go to those meetings anymore. It looks like you've got this situation handled".

I snickered then like I did this week. By 90 days into Recovery, I already knew that I'd be attending meetings for the rest of my life because they're what keeps you sober.

MEETINGS: I was asked this morning if I attend support group meetings while traveling and the answer is; yes, occasionally.

There have been some embarrassing times where bellmen in hotel lobbies have shouted out to their co-workers, "HEY! This guy wants to know where to find an ___ meeting! Does anybody know where they are?"

At that time, I was early in Recovery so, of course, I was suitably horrified and covered my face with my jacket.

Nowadays, at 976 days sober, I would just take that silly situation and laugh. 1,000 days are coming up fast!

As for meetings in Florida, Arizona and Texas, they've been outstanding and it's nice to get out of my bubble to see how others do it.

ANOTHER REASON TO BE SOBER: The fancy Italian restaurant I was in last night with my wife served up an awesome meal but the server wasn't impressed that we weren't drinking (a lower tab generally means a lower tip).

Does anyone else notice that when you're not drinking, the service gets worse and the server isn't as friendly?

I tipped him 20% regardless - because I usually do - but thought he could've been far nicer. He was bubbly at the start of the evening until he took our drink orders. Later on, he couldn't of cared less when I told him we were from Saskatchewan and the restaurant was highly recommended by everyone.

However after shopping until the stores closed, we were home early to catch the Bears and Packers on Thursday Night Football in our room.

I arose at 7:00 am ET (5:00 am Sask Time) and that only allowed me to get to the back of an horrendously long lineup at Tim Hortons for my morning coffee. But physically and mentally, I felt like a million bucks.

With an XL Double Cream in hand, I found a nice spot in hotel lobby to surf "news" stories about the Riders and RedBlacks, the NHL's Vegas Golden Knights and the WHL.

Life is good! Time for another Tims.

Welcome! We are just getting rolling on this new website at Pedersen Recovery Inc. but I wanted to take this opportunity to say thank you for visiting and hopefully you find something you like!

We are in the early stages of putting together the Pedersen Recovery Tour which will have me traveling across the province speaking to groups, teams, organizations, schools, companies and the like about Recovery, Substance Abuse Prevention and Mental Illness.

Currently we are gathering sponsorship for the tour so that these presentations will be provided in your community at NO COST for the town!

I'll also be writing blog posts, telling stories and getting things off my chest here on this page as they pertain to the world of Recovery.

Thanks again for stopping by!